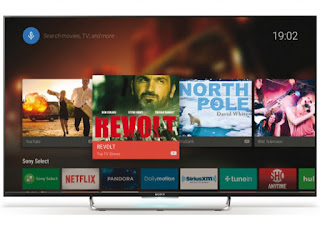 
Sony updated some TV's to Android 6.0 on mid-December of 2016. This update introduced a bug on some TV's. The TV will no longer turn on (quickly) after a period of time that it is turned off.

Symptom: The TV won't turn on with the remote's power button. On my case the bottom light of the TV will remain in color yellow, and the power buttons just remain unresponsive. After 4 minutes of waiting the light will turn off and the TV will restart complete showing the Android boot animation logo.

It is very annoying since you can not quickly turn on your TV.

Sony's Support: Sony support may suggestion your two things:
1) To make a factory reset of the TV. With this the TV will work fine for a week and after that the bug will show up again.

2) They may change your mainboard, but when it get updated again to version 6.0, the bug will show up again.

Cause: Complaining around on the Sony forum some user found which component may be the issue of the bug. If you turn off the Wifi of the TV, the bug will not show. At the same time it will cripple the TV since wifi it is very important, but it is very interesting that the possible cause of the issue was found.

Affected Models: For the moment this are the affected models reported on the forum:

Sony told on the forum that the bug has been recognized, but it haven't post a fix for the issue in four months.

The OneLink and the Onelink+ Dock Ports

It seems that someone missed to tell this to the Internet. Some Lenovo Thinkpad computers has a dock port call OneLink and it was upgraded to the OneLink+.

Even that it seems that both ports are compatible, they are also different.


Some cables and devices for the OneLink port.

Some cables and devices for the OneLink+ port.

Any more technical detail and description of both ports that can be public is welcome.
Publicado por Martin Iturbide en 10:58 1 comentario: